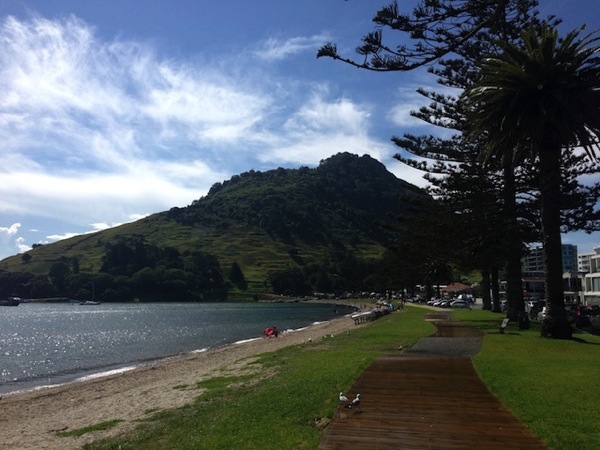 I climbed Mount Maunganui last Saturday. It is on a peninsula north of Tauranga, New Zealand. It has an elevation of 761 feet. My Fitbit One gave me credit for 63 flights of stairs climbed going around and up the Mount. The summit of the Mount is reached by walking trails and stairs.

I’ve climbed the Mount several times, but it had been at least 6 to 8 years since my last climb. I had a pacemaker procedure last June, so I feel so much better now, that I thought I could climb the Mount again. Now, I still have asthma, so it wasn’t easy. Physically fit young men and women in their twenties running the Mount two or three times for exercise is a common sight. My pace was very slow and steady in comparison to theirs, but I made the climb.

Many of the challenging things we do in life are not done in one fell swoop like Superman’s ability “to leap tall buildings in a single bound.” We mentally break down the larger task into smaller ones that seem doable. I was doing that in this climb. I would look at a set of stairs and say, “I know that I can make it to the top of these stairs.” Or, I would see a trail that went up and around a curve. I would promise myself that I would walk that much of the trail, and then set another goal. I made it up the Mount setting smaller goals until I had reached the bigger goal. That strategy works on many things in life.

You may be wanting to become more regular in prayer and Bible reading. You may have physical fitness goals or educational goals. You may have areas to work on in a relationship. The reality is that big projects are accomplished as we are able to see the various smaller steps that make up the big project. As the old time management adage goes, “How do you eat an elephant?” The answer is “one bite at a time.”

One of the problems climbing the Mount is that there is so much vegetation that you cannot see the top until you are very close. I had a runner who was descending the mount say to me, “Almost to the top, mate.” It was encouraging, and at that moment, I needed some encouragement. (I probably looked like I needed some encouragement too.) By the way, I wasn’t nearly as close to the top as I had hoped. Shortly after I heard those words, I came to a zig-zag staircase that discouraged me, but the words of encouragement kept me going.

Remember to give some encouragement along the way. We all need it in Christian living. We may need it in other areas of our life as well.

Here’s to the big, important things in our lives. Here’s to encouragement along the way. May you find new mountains to climb.

The Goal of Life

On July 4, 1952, Florence Chadwick attempted to swim the channel from Catalina Island to California. She was no new comer to long distance swimming. She was the first woman to swim the English Channel in both directions. The conditions that day were challenging. The water was numbing cold. Sharks were driven away by rifle fire. But the greatest challenge was the fog. The fog was so thick that you could barely see the boats that accompanied her. For 15 hours, she swam before asking to be taken out of the water. Her trainer attempted to urge her on, but to no avail. She quit only to find herself one mile from land. In an interview she said, “I’m not excusing myself, but if I could have seen the land I might have made it.” The fog obscuring her view of the goal had defeated her.

Do we see our goal or does the “fog” of busyness and daily living obscure our sight and discourage us? One thing is certain—Christian living is goal oriented. Listen to the Apostle Paul.

But whatever gain I had, I counted as loss for the sake of Christ. Indeed, I count everything as loss because of the surpassing worth of knowing Christ Jesus my Lord. For his sake I have suffered the loss of all things and count them as rubbish, in order that I may gain Christ and be found in him, not having a righteousness of my own that comes from the law, but that which comes through faith in Christ, the righteousness from God that depends on faith— that I may know him and the power of his resurrection, and may share his sufferings, becoming like him in his death, that by any means possible I may attain the resurrection from the dead. Not that I have already obtained this or am already perfect, but I press on to make it my own, because Christ Jesus has made me his own. Brothers, I do not consider that I have made it my own. But one thing I do: forgetting what lies behind and straining forward to what lies ahead, I press on toward the goal for the prize of the upward call of God in Christ Jesus. Philippians 3:7-14, ESV

Paul clearly sees his goal. He realizes that he has not yet attained it. He is willing to sacrifice everything to attain “the prize of the upward call of God in Christ Jesus.” Such goal oriented language is not unusual in scripture (see also 1 Corinthians 9:24-27, Matthew 6:33, Matthew 22:37, and Ecclesiastes 12:13).

Two months after Florence Chadwick’s failed attempt, she again stepped into the waters off Catalina. She swam the distance setting a new speed record for the swim. The difference—this time she could see her goal. The fog had lifted.

Is there a fog obscuring your sight of the goal of life? May we with Paul say, “I press on toward the goal for the prize of the upward call of God in Christ Jesus” (Philippians 3:14, ESV).